to share in an experience that will be remembered for years. The year-round beauty changes with the seasons in the Missouri Backcountry and will delight the senses.

When visiting Camp Trinity, you will discover a beautiful setting for your group’s retreat.

Since 1970, this camp has served as a gathering site for tens of thousands from all over the world. Whatever the season, there is always something special for your group. Summer time at Camp Trinity is spent enjoying the luscious green grass and the cool waters of the inground swimming pool. The fish from the various lakes on the camp property await both the experienced and the inexperienced fisher. The lakes also beckon the canoeists for an excursion.

Whether you like to swim, fish, canoe, kayak, take a nature walk, play horseshoes, basketball, softball, volleyball or simply relax, nowhere can you enjoy doing it more than at Camp Trinity. Fall transfigures the hills of Camp Trinity into a veritable artist’s palette of colors. When winter arrives the camp takes on a new look, allowing for sledding and some ice skating.

Let the friendly and courteous staff at Camp Trinity make your next retreat an experience to remember. With scrumptious meals and prompt service, the staff is always there to assist you with your retreat. Camp Trinity has room for up to 100 people. The housing includes a dormitory style building with eight air conditioned rooms. Each of these rooms has it’s own
bathroom and shower. New additions include the Shepherd’s Shower House and Hall for campers preferring to tent or RV camp (full hook-ups) and St. Matthew Family Cabin.

The camp has an inground, lighted swimming pool, a lighted basketball/tennis court,
an outdoor chapel, softball field and much more. So whether it’s the summer or the winter, discover Camp Trinity and all that it has to offer.

The History of Camp Trinity

In 1970 land was purchased with the dream of one day starting a camp.  Various donors made it possible to purchase the original 90 acres.  After several years of cleaning brush by Pastor Herman Otten and his wife Grace, the camp was officially dedicated on October 6, 1973.

By the dedication in 1973, a chapel and lodge had been completed.  More than 50 volunteers would work at the camp during the first half of the 1970’s to complete these projects and start on the building of a dormitory.

Mr. Carl Otten was called to be the camp director and was installed May 27, 1979.  He kept that position until September 1, 1991.  Under his directorship, the camp flourished in the late 1970’s and early 1980’s.  In 1980, the pool was completed.  Besides the pool, Camp Trinity now has access to four lakes and a creek which borders the camp on two sides.

Besides being the director at Camp Trinity, Mr. Otten was also a teacher at one of the local schools.  In the late 1980’s, he stepped into an administration job and was required to work all year long at school.  In 1991, he was offered a job in another school district and was no longer able to be director of the camp.

Since Camp Trinity is not supported by any organization but receives all its funds through camp use or donations, the camp was not able to provide adequate maintenance to its buildings during the first part of the 1990’s.  After receiving some loans, the camp purchased Mr. Otten’s home and 20 acres.  The camp also updated some of its equipment and remodeled the buildings at that time.

Starting in 1991, in which there were no campers, the camp has seen a rapid growth in the numbers of users.  Each year more and more people become aware the ministry at Camp Trinity.  Some come for a retreat, others come to serve and still others have a retreat and serve.  Their serving has helped make Camp Trinity what it is today and allows it to continue providing a facility for people of all ages to grow in Christ, the one true God.  Almost all of what you see has been funded by donations and constructed by volunteer labor.

The Spring of 2005, brought more major changes.  It began when the Department of Natural Resources ordered Camp Trinity to replace its two cell lagoon Wastewater Treatment Facility with a Sand filter Wastewater Treatment facility.  All of the recent improvements would not have been possible without the help of many volunteers and donors   The first of these changes was estimated at costing between $65,000 and $150,000.  Camp Trinity was able to raise almost $65,000 and install the system for that amount thanks to the volunteer help of many.  This new system has allowed Camp Trinity serve more people safely while in turn preserve our environment.

In June of 2011 the St. Matthew Family Cabin was completed and first opened to the public. It allows smaller families and church groups a nice intimate setting with plenty of time to rest and refresh, while being surrounded by many reminders of the Almighty Maker in words, statues, symbols and nature.

A statue of St. Matthew hangs in the dining area of the cabin.  It was hand crafted and donated to Camp Trinity by Hope Dexter.  The words of St. Matthew chapter 20 verse 28 accompany it.  “The Son of Man did not come to be served but to serve and give His life as a ransom for many.”  This passage was chosen for the cabin built by the service of the many volunteers who took time away from their busy lives to serve the Lord at Camp Trinity and make the St. Matthew Cabin possible.  In the future as the Lord provides, Camp Trinity hopes to add the cabins St. Mark, St. Luke and St. John.

At about the same time just downhill from the cabin an approximately 40’ cedar tree was made into a cross has been labeled the 21st Reformation Cross.  It is dedicated and is in memory of Dr. Kurt Marquart “The International Luther”.  “Scripture Alone, Faith Alone, Grace Alone” on the triangle which is hung at the cross beams.   At the foot of the cross are the words “It is Finished” John 19:30 and “He has Risen” Luke 24:6.  A more detailed description of the cross is on display in Korff Lodge.

The final addition was the Shepherd’s Shower House dedicated to the Lord’s service in the Fall of 2011.  This addition, made possible by Shepherd of Hills Lutheran Church, Hermann, MO, has greatly added to the structural aspect of Camp Trinity by providing 7 new showers, including 1 fully handicap accessible along with 5 additional toilets including 1 fully ADA approved.  The restroom facilities were added onto the Rec Hall with the entire building now being known as Shepherd’s Shower House and Hall.  The following words of scripture “The blood of Jesus, His Son, washes us clean from every sin.”  I John 1:7 will be used to identify this newly expanded facility.

The Shepherd’s Shower House is also available to our tenters, RV Campers and overflow in the main sleeping quarters, it will also provide a restroom for the users of Shepherd’s Hall.  Before this addition users had to trek up the hill to either the office or the lodge.  Camp Trinity is continuing to look for sponsorship and funding to finalize some of these improvements.

As we have experienced, there is a tremendous need for a facility like Camp Trinity.  However, for the camp to continue operating in the 21st century, we will need continued support from our many users and financial support from those who have the vision to see the importance of outdoor ministry.

We believe that the local churches are ultimately responsible for the souls of each of their members.  We are simply providing Camp Trinity as an alternative meeting place for the churches or for other organizations.  Camp is an excellent place to break down barriers that may be erected in a more formal place of worship.

It has been shown in past polls that from 60% to 80% of young people entering church work did so because of some experience at an outdoor ministry activity.

Support for your local retreat center will allow positive experiences for campers in the coming generations.  This in turn will help ensure the spread of the Gospel for all ages. 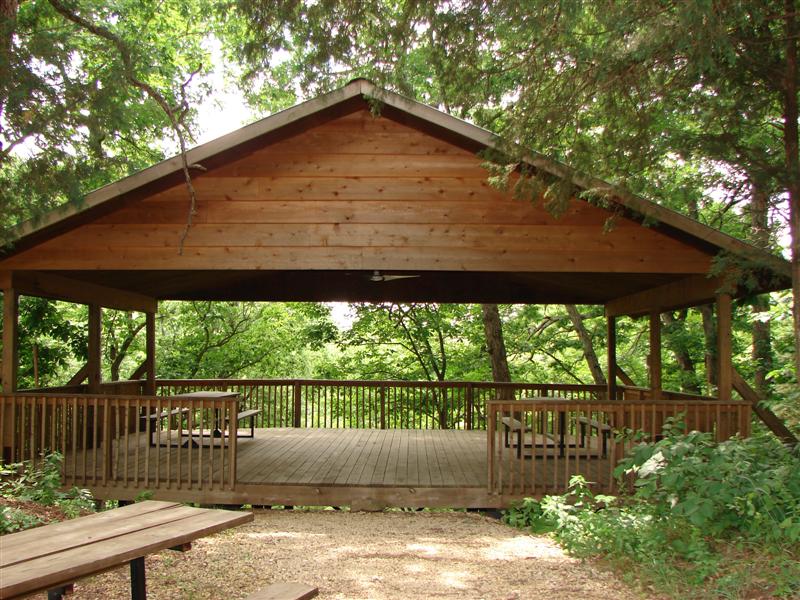 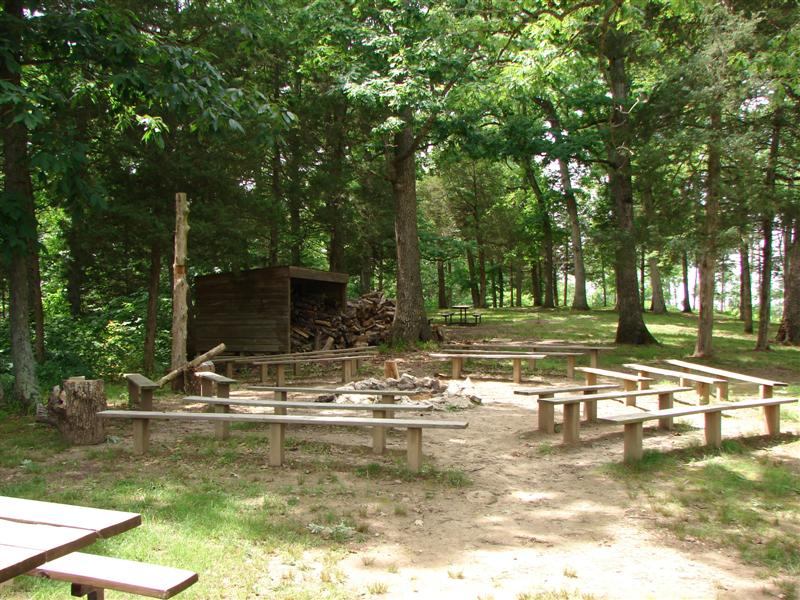 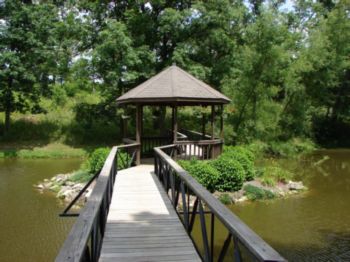 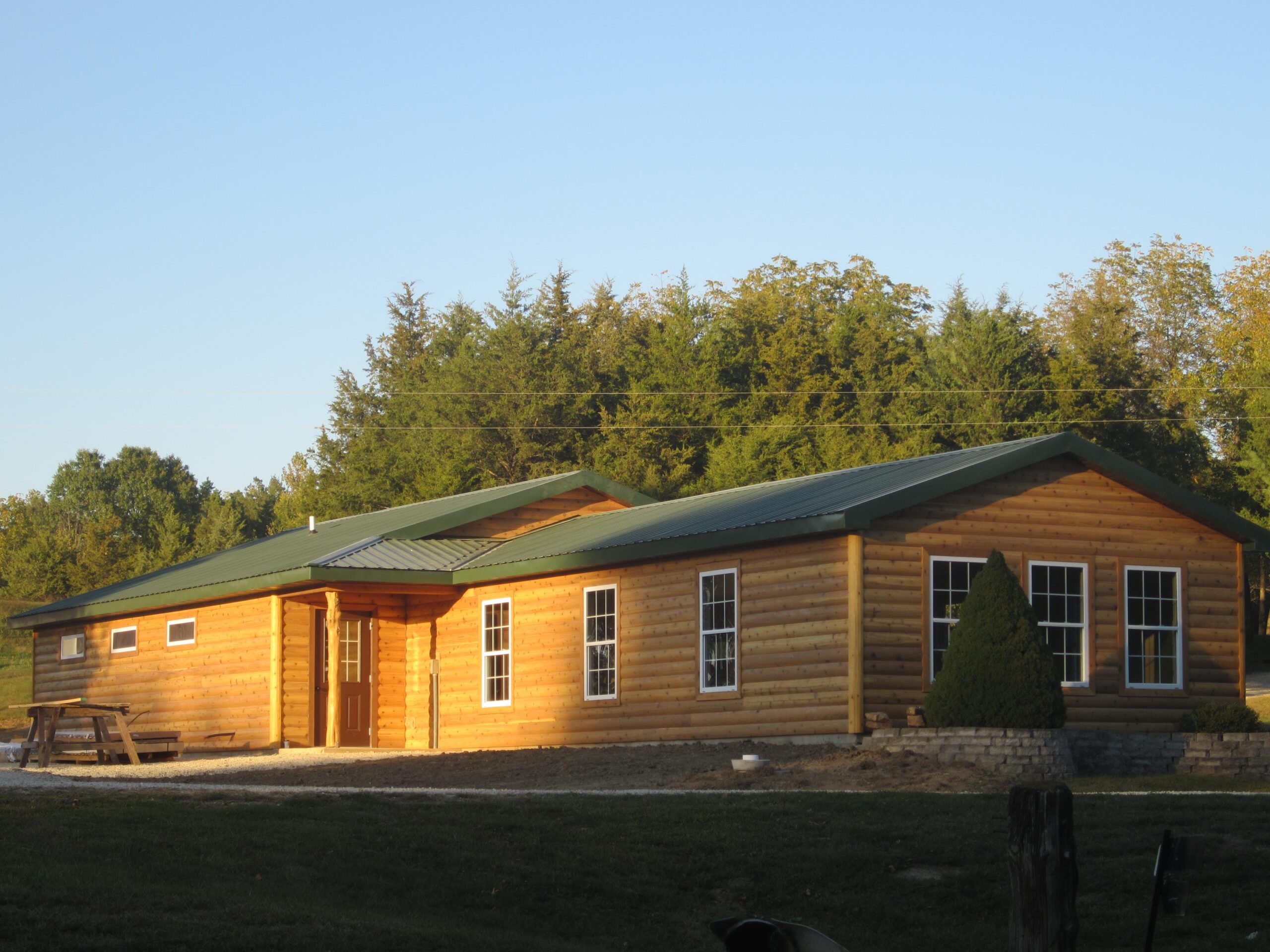 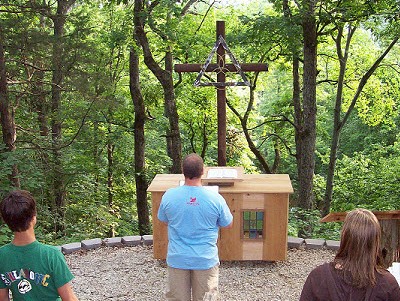 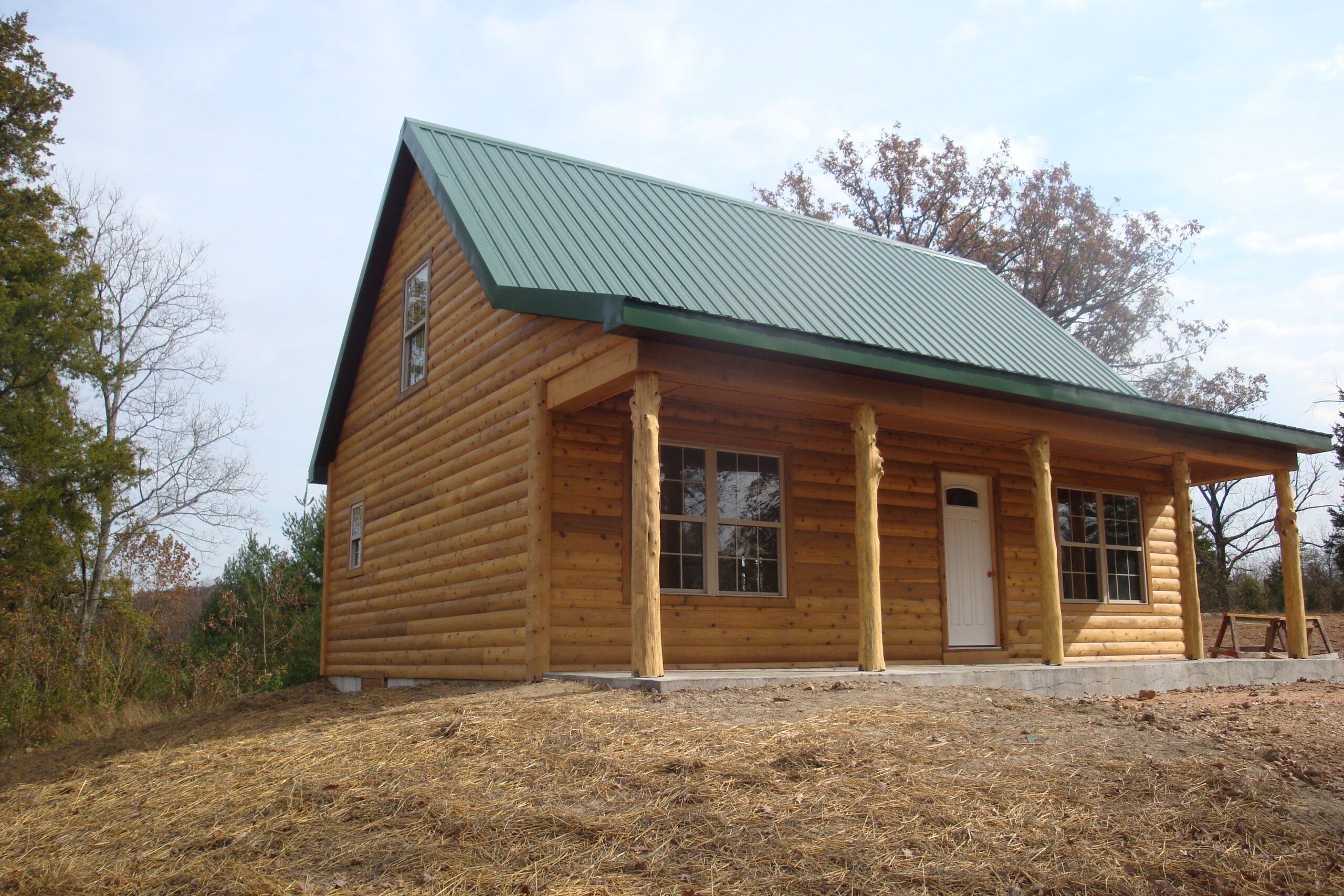 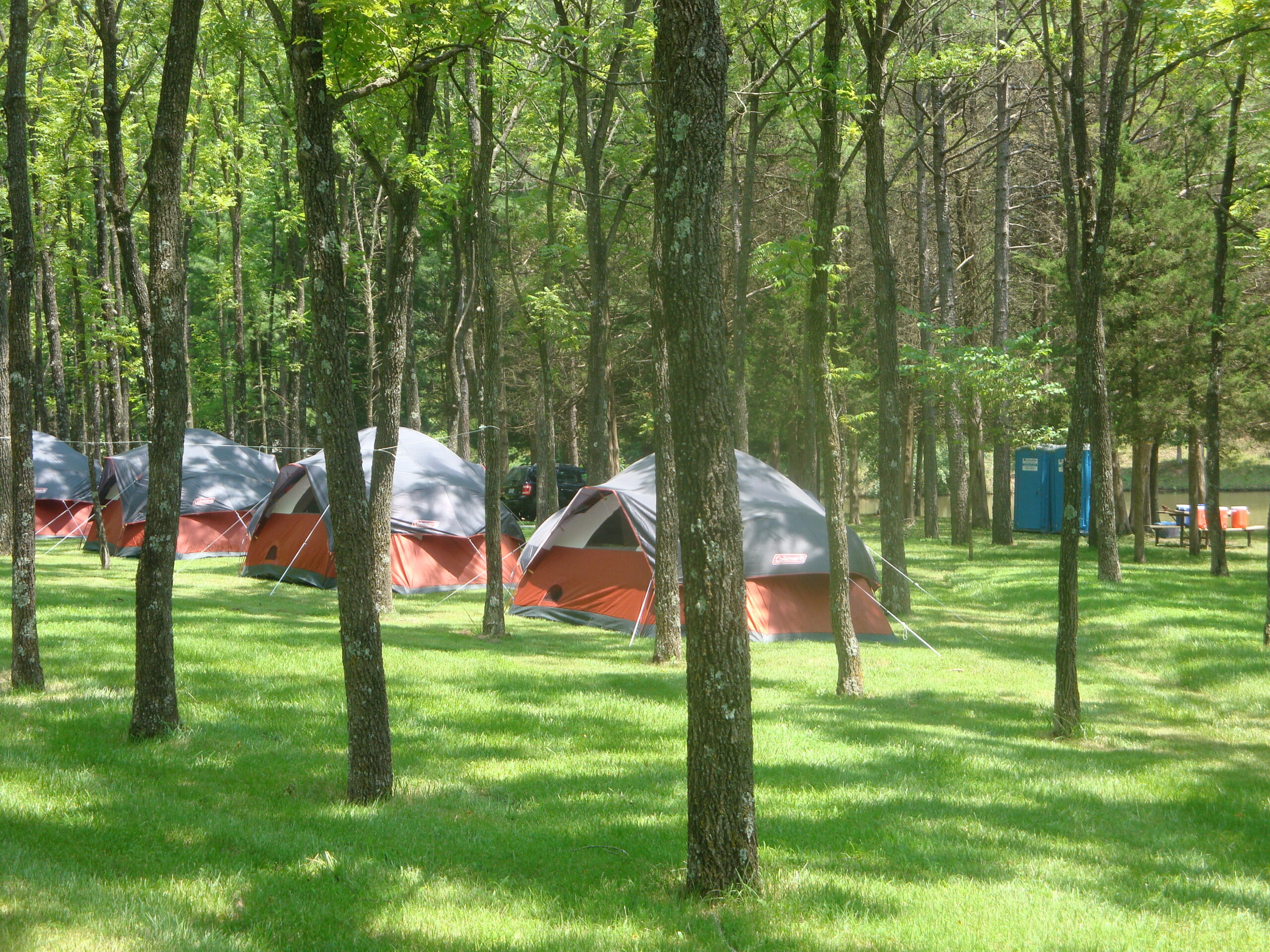